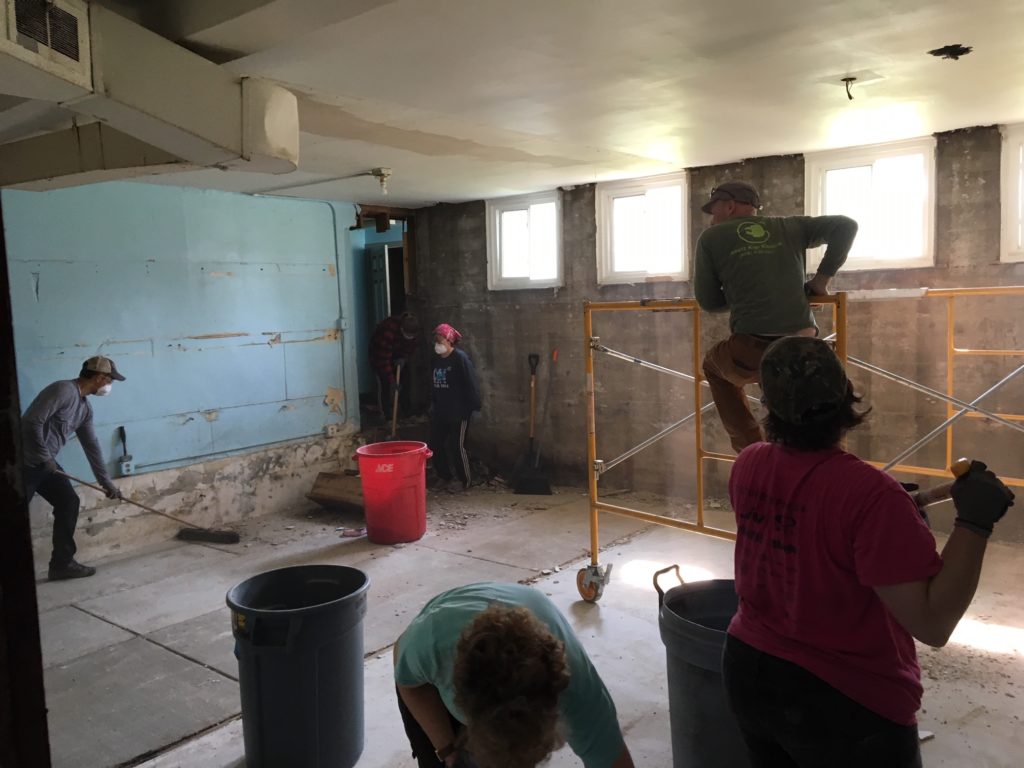 Launching off the question I get asked most often, here’s inviting you into a bit of the magic I saw this past week. – Ginny Whitelaw, June, 2019

Where have I been lately? Chiseling years of grease off the great cast iron and steel stove that could double as a safe in case we need one, but will more likely serve as the core of the kitchen at the new Madison dojo, Daikozen-ji. Our summer sesshin started in the traditional manner with a powerhouse group who sat as if their life depended on it, and then pivoted to the renovation of the Mifflin St. building for the next 4 days. Tear out, clear out, throw out: only a week after closing on the property, we were open for business with morning meditation. A beacon to the Madison community now shining.

So, the dojo is finished? Oh, heavens no. We’ve finished a good deal of deconstruction, but building it back up to the uses we’ll put it to will happen over many months. Still, it was energizing to see how much could be accomplished over just a few days and how many people came to help. Even the neighbor across the street who stopped by to greet us, got talking with lawn-mowing Rebecca, and came back later to rake. If you’re in the Madison area and want to see how a dojo springs to life, I understand there’ll be work projects underway every weekend that could use your helping hands.  If your experience matches mine, you’ll find something magical in it.

Magical, really? Not magic in the rabbit-out-of-a-hat trick.  But magic as in being perfectly in tune with the times, with the Way, with what’s needed and ready to happen. It’s almost like this dojo is guiding us in how it wants to be brought about. That’s not to take anything from Scott Kiel’s skillful leadership of the remodeling.  But even Scott would say he’s paying attention to what’s ripe and ready to happen in each moment based on what just happened, what order of events is efficient, and who just walked in the door.

Why do you think this dojo wanted to happen now? Well, that’s just the point: I could give you a reason, but it would just be my mind trying to make surface sense of something much deeper. This whole experience is revealing for me another angle on resonance – the way all things happen. The Madison contingent of our community, spearheaded by Ken, had been tuned and primed to build a permanent training home in the City for some time. A few possibilities surfaced along the way, but nothing compelling. Meanwhile, we kept training, growing, building a kiln, expanding our dojo presence, expanding IZL, as many of you have been a part of. And then, as latent potential suddenly made itself kinetic: there it was. The Mifflin St building felt right to all of us from the start. As Gordon observed, it came to us feeling like a project fully formed. Amplified through all us resonating to the same sense of “rightness”, energy built quickly.  We went from caution to certainty to closing within a few months.

Why credit resonance and not the leaders in Madison who made it happen? But I am crediting those leaders with the highest accolade: vibrating with the Way and with one another.  With our orientation to individualism, we get things backwards in our sense of causality.  We want to think great leaders are those who come up with a great vision and then make it happen. Flip that around and imagine that the vision-energy is present in the Zeitgeist and great leaders are the ones who can sense it, vibrate with it, and turn it into action. Hence the importance of honing our sensitivity and tuning our ability to vibrate with the energy around us. The only thing more powerful than a skillful leader who resonates with the Way is a whole groupof people who pick up the same signal, the same vision, and co-create it. You can’t fake this level of engagement and passion.

We can backfill a story around all of it, and there are already rich and wonderful stories forming around this dojo.  But story is the ego’s understanding – how it makes meaning – either my story or our stories. That’s all fine, but what I’m pointing to is beyond the work of the ego.

Like many of you, I don’t live in Madison and can only come to the physical dojo now and then, but being part of the community that is the dojo and IZL, training together, resonating with the energy of the universe and applying ourselves fully to it is one of the great joys of my life.  Come resonate with us!