trump, hamilton, and the zen leader walk into a bar… 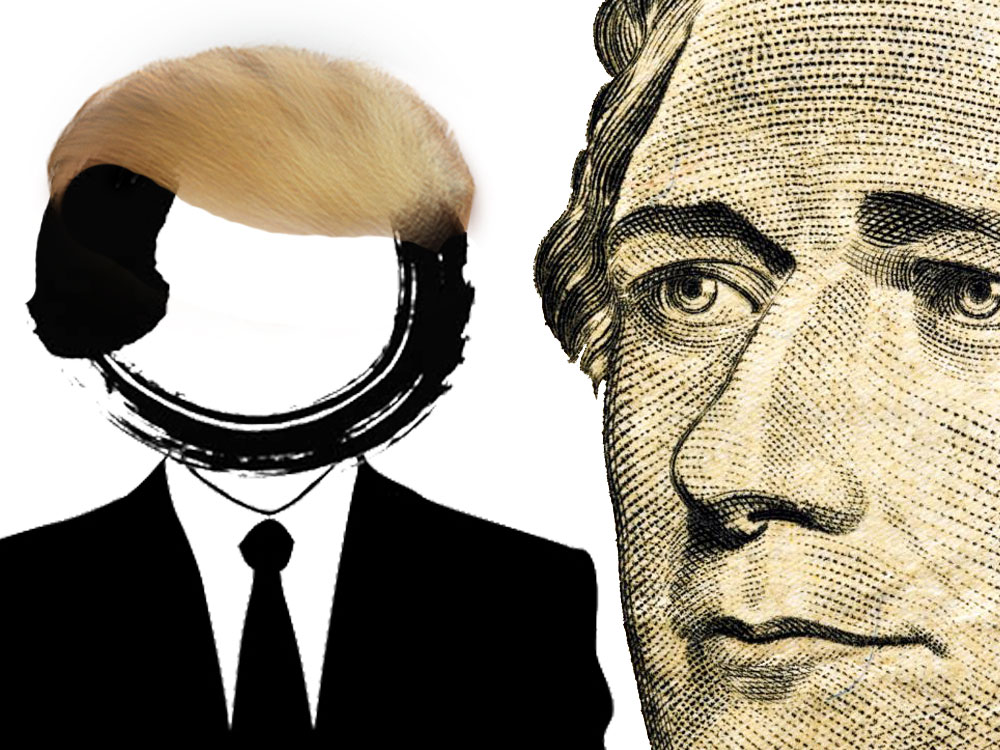 OK, so that didn’t literally happen, but it’s a figurative summary of my week. On Monday, I was dealing with a setback in the growth of the Institute for Zen Leadership. On Tuesday, Donald Trump apparently won the Republican nomination for President. On Wednesday, my husband, mother-in-law and I reveled in the genius that is Hamilton. You wouldn’t think that these three events would have much to say to one another, but when they churn around in the same nervous system for awhile, it’s surprising what comes out. You start thinking about messaging, and why one message catches fire, while another gets drowned out, why one sparks the imagination, while another sparks rage. From an Integral view, it’s clear we either get pulled up or down through the layers of our own development by the leaders we admire, by the arts we love, and by the choices we make. And the messaging of those leaders, those arts, and those choices creates more resonance, turning small movements into large.

So if The Zen Leader, Trump, and Hamilton did walk into a bar, the Zen Leader would want to learn from these two cultural phenomes how to message in a culturally resonant way. How to inspire people to pause in their busyness, connect with what is, to resource their lives and leadership from a place of centered connectedness.

“That’s crazy!” my imaginary Trump would interrupt at this point. “You don’t reach the masses with a message that pulls people up. You have to pull people down. I’ve seen the numbers – I’m good at math, you know.” And he starts to quote from Wilber’s Theory of Everything, the percentages of the adult population at each stage of development: 20% are Power Gods where might is right. 40% are rule-following ideologues who feel screwed by the current rules. Another 30% are rational individualists who want to be sure what’s in it for them. “You don’t win elections without winning these people,” he points out. And even if the percentages in America today make a little more room for the progressive, post-modern Integralists, even they had to grow up through these levels and can always be pushed back into them. “Just tap into fear, anger, and you get across to anyone.”

“Yes, well we’re about creating leaders who can take away fear,” the Zen Leader would say. For the acts that come from fear are too small-self-serving to solve the interconnected problems we face, whether it’s how to run a global company or fix a lead-poisoned water supply. The Zen Leader would turn to Hamilton and say, “Your messaging pulls people up. You inspire! You bring the American story to life and make us all want to live our gifts. Tell me, how can I message above the rage of Trump?”

Timeless Shakespearean hip-hop. With a deep bow to Lyn-Manuel Miranda, let me offer what his messaging inspires today. Feel free to snap along.

A country torn by words outworn
but shouted nonetheless.
A play of scorn,
Our ballots torn from right to left, bereft of hope,
Let walls begin
and make America hate again.

This is my country, is it not? and yet
how human to be dazed by fame it’s easy to forget
Who we are
While we are certain whose fault it was to let
the progress that we won
to be consumed by one percent.

We’re quick to fan the flames of blame,
As we ourselves create the game.
The hungers in us – just the same
in those who lose and those who gain;
And hunger untamed mounts a rage,
an intricately woven cage.

We have a choice (because we’re breathing)
to export our rage, our tempers seething,
or penetrate our deepest truth, our mindset reeling
as we unmask the culprit stealing
Our true nature
Exploding!
into generous feeling:
Our universal, fearless healing.

In a world that so greatly needs leaders who are more awakened than enraged, it seems like a cruel irony that the first is so difficult to message, much less do, and the second so easy. But the other truth is that each of us is the form of emptiness, a self without limits expressed through a limited self. Perhaps that which is limitless in you can cajole the self limited by too busy a schedule to invest in its unknown self, its unbounded potential. And you might pause. Stop. Breathe. Meditate. Express the Zen Leader in you. Even come to a Zen Leader program. After all, it’s easier than getting tickets to Hamilton.

About the author: Dr. Ginny Whitelaw is a leadership expert and Zen master in the Chozen-ji line of Rinzai Zen. She is the author of The Zen Leader, President of Focus Leadership, and founder of the Institute for Zen Leadership.