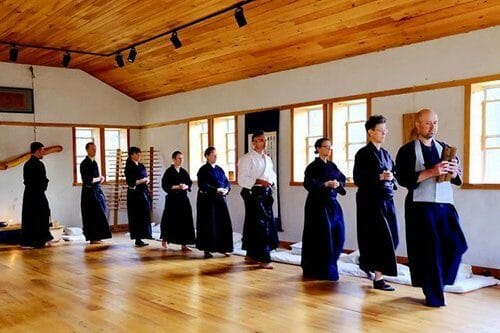 Here’s riffing off the question I get asked most often. And here’s wishing you a wonderful spring and extending a warm invite to join us again soon.

Where have I been lately? Recently back from spring sesshin at the Spring Green Dojo, where solid energy gathered for 4 days of intensive training. Can’t over-state what a gift it is to train with such strong people. One of the themes for the weekend was taking our practices out of the realm of ritual and more deeply experiencing their effects in the body. In particular, I was moved by our work with sound and resonance. Even looking at the picture above, I can feel the sound of walking as one, when the rhythm of each of us re-sounded through all.

Why is resonance important? Because it’s the principle of change. It’s how all things are moved. It creates form and destroys form.

On the tiniest scale, resonance is how energy forms matter, as recreated in the giant accelerators of high energy physics. Finding the frequencies that lead to particle formation is sometimes called “resonance hunting.” It’s also how little forms grow larger; when frequencies match or entrain, effects add up, creating the world of atoms, earth, water, wind, sentient beings and civilizations.

On the human scale, resonance is how we communicate, and get others moving with us, from the vibrations of sound waves to creating engagement. Picture, if you will, a large, lumbering adult versus a small, hyperactive teenager. Whether we’re trying to get them moving with us on a dance floor, on an Aikido mat, or on a team, we’ll be most effective by first matching their frequency – getting on the same wavelength – and going from there.

On the large scale, resonance is the principle by which change builds invisibly and then manifests suddenly, destroying an earlier form: The persistent lapping of waves that suddenly cracks an iceberg. The pent up pressure in Eastern Europe that suddenly dismantles the Berlin Wall. The increasing pressure for gun rampage control that suddenly galvanizes at Parkland High School – these are all the work of resonance.

So this same principle of resonance applies even to social change? Absolutely. Indeed, it was a conversation with Gordon Greene and Glynnis Rengger on climate change that got me thinking more deeply about resonance. We can feel the pressure building in the Zeitgeist around climate change from the IPCC report on our planet burning to countries declaring a climate emergency.  And yet getting people, much less institutions, to change their habits is painfully slow. At this rate, given the time horizon in which cataclysmic effects are predicted, we’ll do too little too late. We need enough pressure (i.e., energy added up) and a sparking incident – the equivalent of a Parkland moment – to radically change our rate of change.

Likewise with other social change, from dysfunctions in our democracy, to the dislocation of AI, to the brokenness of our healthcare system, we can feel the mounting pressure, like so many lapping waves against these iceberg systems that refuse to budge. Until they quite suddenly do.

Why bother to train with resonance if it happens anyway? Because even though resonance is a universal principle, how well WE resonate as a human-musical-instrument is up to us.  We can be dull as putty or clear as a bell, depending on how much tension/friction we embody. The more relaxed we are, the more open our senses, the more energy flows through us, the more clearly we vibrate with what is going on. The chanting we do, for example, in Zen training, is not only lengthening our exhale and developing our hara, but is using the vibration of sound to open up our body so that we resonate more fully with what’s going on. To put it succinctly: we are tuning ourselves to resonate with universal energy.

That sounds big, but how do we make it practical? Picture sitting on a swingset as a kid, and how you discovered that, by pumping your legs at the right time, you could make little oscillations larger. On the other hand, if you just shook your legs at a high frequency, you merely rattled the chains. Well you can feel into any person or situation as a sort of swingset, sensing the way to move that “catches on”, versus rattles the chains. We know from physics that lower frequencies entrain or capture higher frequencies, so we can apply this by slowing down our frequency, lengthening our exhale, and dropping into hara, which is the body cavity that vibrates at the lowest frequency. Let our actions come from here, playing with the pacing, feeling for them to “catch on”. You could call this resonance hunting writ large.

And here’s what could be my favorite practical example of resonance from Kristi Crymes.  She’s one of our HEAL alums and sesshin participants – the 3rdperson in the walking meditation line above. She wrote me this week with this story: Putting the 2-year old to sleep last night, he was totally restless and fighting sleep (about 30 minutes of effort). So I put my feet against the wall and started chanting vowels and within 2 minutes he was asleep. I think the world deserves an article entitled, “Use of Hara in the Desperate Parenting of Toddlers”.

Yes! The exercise she speaks of, also excellent for your own restlessness and tuning, is downloadable below. Also below are ways to dive into upcoming programs, including Alex Greene’s body-opening Somatic Zen, as well as HEAL and Zen Leader for those in healthcare and elsewhere wanting to build resilience and resonant impact. And please share this; don’t keep us a secret. To borrow from Kristi, I think the world deserves everyone knowing how to resonate with universal energy and turn it into things that matter.