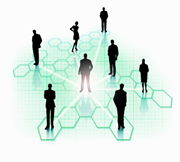 Has it ever seemed like the right person came into your life at exactly the right time? This has happened to me on many occasions. For example: the man who introduced me to another man, whom I later married, the artist who unblocked me when I was feeling stuck in my work (this has happened to me twice), the teacher who deepened my personal growth or showed me a new perspective to a problem I was struggling with (still counting!:-)

We are forever meeting new people and crossing paths with others, mostly on a casual basis. But, I pay closer attention now than I used to. You never know who may be that next person of influence… the one who will shake up your thought processes, help build your vision or lead you into an area of your life that is not yet revealed.

There is a television show called Touch, now in its second season, that speaks to this same idea. Keifer Sutherland plays Martin, the father of a challenged 12-year old mute son. He discovers his son has the ability to perceive seemingly hidden patterns that connect every life on the planet. In each episode, Martin helps decipher these numbers and put the pieces together in order to help people all over the world whose lives touched one another – whether they knew it or not.

This whole idea doesn’t seem so far-fetched to me anymore. In fact, I try to approach every introduction and encounter with a kind of watchful anticipation. I have stopped passing judgment on who is important and who isn’t, and as a result, my life gets richer and more interesting all the time. Judgment, or “limiting beliefs,” makes us smaller.

In the book, The Zen Leader, Ginny Whitelaw describes how we are our own worst enemies when it comes to limiting beliefs. “‘I know’ is possibly the most self-limiting phrase in any language,” states Ginny, “for it stops our mind on an ‘I’ that is certain of conventional delusion. Not because we’re stupid,” she continues, “but because we are working with limited sensors, vaguely grasping a three-dimensional projection of an at-least-10-dimensional universe, through the biases of personality, culture, and so on, selecting what we notice and how we make meaning. In conventional matters, such as knowing the rules of the road or where we keep our toothbrush, conventional knowing works just fine, and we’d exhaust ourselves if we constantly questioned it. But in assumptions we make about the world, our customers, the future, the people closest to us, or the possibility of innovation, we can get huge mileage out of knowing less and learning more.”

Are you aware of how your own filters play into the world you create for yourself? Here’s an exercise you might enjoy from The Zen Leader that lets you play with these connections between “how you are” and your everyday world.

In this time of global connectivity, where information is now measured in millions of terabytes, our own influence is broader than we can possibly realize. Making connections, and using awareness to uncover the threads that each connection may offer, may seem like a painstaking process, but it’s not. All we really need to do, as Ginny states, is “Suspend knowing.”

Our future and the potential of our own lives on this planet may be entwined in the very next person we meet. Be aware that even a casual introduction might lead to an important piece to the puzzle.