or: The Lure of the Shakuhachi’s Siren Song 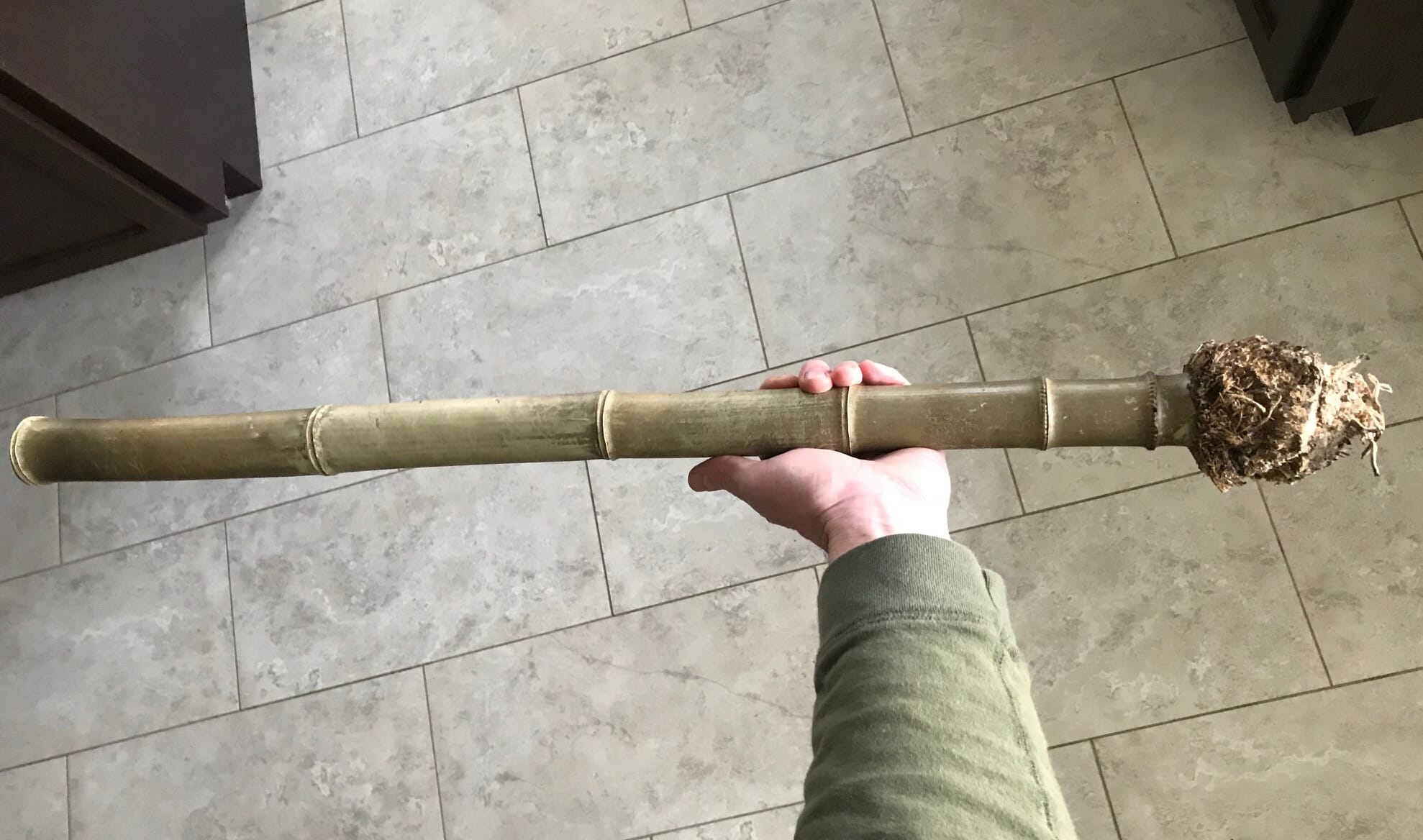 I was introduced to the shakuhachi a relatively short time ago through the Chosei Zen Virtual Dojo. As part of morning zazen, the shakuhachi is periodically played to assist in harmonizing the natural resonance of our bodies and providing a focus for elongating the out-breath. On this particular morning, Sensei Pittelli was playing and as I followed along, I was deeply moved by what may be best described as ‘blowing dharma’. An elucidating of truth; there was no separation between what was being played and what was being heard.

The next day I purchased an inexpensive plastic shakuhachi online, uncertain yet open to the possibility that this may be a path worth exploring. I have played every day since; first learning to make a sound and then to stabilize and elongate that sound as a form of breath-control and meditation. In time, I became curious to play and hear the sound of different sized shakuhachi. I was also drawn to play a more traditional and natural bamboo shakuhachi; one that may provide a closer connection to nature.

The biggest problem was where to find these. It is difficult to know the quality and condition of a bamboo shakuhachi through an online retailer, and it is not something you find in a standard music shop, at least not in Wisconsin. Fortunately, with a sincere intent established, the universe provided. A friend of mine gifted me a simple unfinished bamboo shakuhachi that he had started with but had recently moved on from. When it arrived, I thought it was a kid’s toy, similar to what one may find at a chachki shop in some tourist trap vacation town. My first reaction was that I had been the butt of a joke. In fact, it even made me chuckle a bit. Then I played it and was reminded of the idiom ‘judging a book by its cover’.

The sound was beautiful. It was deep and resonant. However, what struck me most was the feel. The feel of my breath vibrating through the bamboo and into my hands and body in a synchronous feedback loop. I felt, at that moment, a wish for all sentient beings to share this feeling, which had been brought on through the interaction of breath and bamboo, vibration and reverberation. I looked down and once again inspected this culm of bamboo. It was so simple, so plain, so natural; like a piece of driftwood fashioned into a piece of art. In a former life, it may have been a stake holding up a rose bush in the garden. It was then that a feeling moved through me that I could make something like this myself or at least have fun trying.

I became determined to make a shakuhachi as simply and naturally as possible. I was particularly drawn to the idea of being close to nature and in so doing, employing the use of available natural materials without ornaments or inlays, without precision boring or urishi shaping. I jumped head first into this potentiality. I continued playing, practicing long blowing, and at the same time learning everything I could gather about the bamboo shakuhachi. I was inspired by the idea of each piece having its own voice and feel, each piece being as it is and always in-tune, with itself. I became further convinced that this simple type of shakuhachi would be perfect for blowing meditation. I endeavored to create something in this standard.

After much effort, frustration, and continual humbling, I have become a novice maker able to produce shakuhachi in various sizes that are simple, fairly easy to play and relatively in tune with the minor pentatonic scale. These are not professional level, but raw, simple pieces of bamboo crafted into what could best be described as hotchiku (Dharma Bamboo), made for blowing meditation and solo practice.

It is uncertain I would have come this far without my first making experience, which turned out to be a success. You see, I did not know what I was doing. I just naively pushed forward, sensing my way, determined to enjoy the process and not worry about the outcome. In a sense, it was all of the universe at work during that first attempt. Because somehow, this piece of old, discarded, dried out bamboo became an expression of ultimate truth, expounding a beautiful sound with a haunting timbre that was in itself perfect.

I was too absorbed in the work to recall exactly how it had happened, but I was left holding a base note shakuhachi that rumbled in the key of G, pitched perfectly at 196 hertz. I quickly learned that a shakuhachi tells you what it is; that is, what key it will play in. This occurs upon the first blow, right after completion of the boring and utaguchi (blowing edge), before opening any finger holes. ‘Hello G3 shakuhachi, it is an honor to meet you.’

And just like that, I was overcome with an almost immediate feeling of attachment, marked by fear: ‘Stop while you are ahead’; ‘Leave it as it is’; and ‘Just use it for Ro-Buki’. I had read about shakuhachi with no holes, used in the practice of Ro-Buki (blowing long Ro, which is the Japanese name for the base note of the flute). It would take several days before I realized this attachment and the related trepidating thoughts had petrified my intentions and actions. Once aware of this, the attachment and worry lost its hold and I was able to once again step forward into the unknown. Focused now on completing this new shakuhachi so that it may express itself fully, I finalized a formula, measured, marked and opened five holes along the bamboo’s body. Lo and behold, it played the minor pentatonic scale as intended. I stood in awe, not knowing how it occurred, only knowing it somehow had.

Since then, the making path has provided highs and lows. There have been dozens of attempts that did not turn out and many pieces of bamboo damaged beyond repair (these will become wind chimes). I’ve spent many, many hours preparing bamboo blanks only to see them crack during boring or splinter while the utaguchi was cut. Even more devastating were the fatal errors that would happen after the shakuhachi was nearly complete or when I was applying final touches to an already finished piece. Interestingly, though, these frustrations and setbacks became my greatest teacher.

As I continue along this path, shakuhachi playing and making have become indistinguishable. There is no separation between the processes of making and playing, as for me, they have merged and are like two sides of the same coin. Making has made me a better player and playing has made me a better maker. It is my wish to share with others, what the shakuhachi has meant and continues to mean to me, in the hopes of inspiring others to be open to finding their Zen.

Shakuhachi zen training is special and unique in the modern world. Yet this practice is available right here and now through our partner organization Chosei Zen. Their offering of shakuhachi training as a zen practice is priceless. Already, this offering has reached many people and made connections across the globe. The offering of various martial and fine arts is a distinctive feature of the Chosei Zen lineage, and I am grateful to those who have cultivated and continue to carry on this path. I believe this offering will continue to grow and provide benefit to many people, because I have experienced it firsthand.

Jeff Nytes is a longtime lay student of Zen, who has recently completed the Zen Leader series.

✔ Learn from pioneers about the growing mental fitness movement

Cross-train with a variety of exercises across 4 domains:

• Mind-Training: Get your mind in shape with neuroscience, mindfulness meditation, and performance psychology.

• Connection: Rejuvenate with the power of nature,  being in relation to others, and holistic nutrition.

By the end of the Bootcamp, you’ll be able to customize a personal mental fitness program that works for your lifestyle. This plan can become a foundation for habits that will continue to support you.

[Road stop sign near Agia Anna is burned by climate-related wildfires that raged in August on the island of Evia, Greece – September 7, 2021.]

How Leaders Can Do The Essential Work Of Our Time, Rescue Their Companies And Revitalize Themselves

Our planet is sick. People are sick.

We can ignore the evidence, but we would be suffering the kind of ignore-ance that leads to even greater suffering, as the facts roll in like breaking waves: the Washington Post reports 85% of the world’s population has already experienced damaging effects from climate change. An international panel of scientists report that more than a million species, critical to the long food chain on which we depend, are threatened with extinction. CNBC reports that nearly half of young people worldwide say that anxiety related to the climate crisis affects their daily life.